Posted on March 10, 2014 by InvestigatorKelly

Friends and neighbors are helping a local family in its efforts to locate a Basking Ridge teen-ager who has been missing now for nearly three weeks.

A web site and Facebook page have been established to seek leads in the ongoing search for Gregory Mayer, 17, who was last seen on Feb. 21 in Salt Lake City, Utah, where he was attending Discovery Ranch, a home for boys with educational and behavioral needs.

Mayer, who attended Ridge High School, ran away unexpectedly from a movie theater in Lehi, Utah, and has not been in contact with his family since.

His parents, Greg and Debbie Mayer, spent several days in Utah but have since returned to pursue leads from the home front.

“We came back to regroup on the (February) 28th,’’ Greg Mayer said. “It was hard leaving Utah but we felt we might get more support back home and mount an electronic effort.’’

As of Monday evening, March 10, Mayer said they had gotten some leads but he “hesitated to get too excited.’’

In addition to using social and traditional media outlets, friends have also printed and sent out fliers to truck stops and various other locations such as transportation centers seeking information from someone who might have seen their son.

“We have about a dozen people who’ve offered to help us,’’ Mayer said. “The outpouring of help, support and prayers has been incredible. It’s just been fantastic to see that kind of community support.’’

Friends have discussed the possibility of holding a community vigil, but Mayer said the family is “trying to figure out what kind of format’’ would be used.

The “last absolute definitive sighting’’ was back on Feb. 25, when he was seen at a Mormon Temple.

He was reportedly speaking with some young sister missionaries, Mayer said, and was observed by an off-day cop who recognized him from a missing person flier.

“They were able to keep him there for maybe 10 minutes but it wasn’t enough.

“Anything we’ve heard from then has not been conclusive,’’ Mayer said.

While in Utah, Mayer said he visited various shelters seeking information. He offered “a couple hundred dollars’’ to the homeless at the time as an incentive, but nothing panned out.

Asked whether he was offering a reward for information at this point, he said he had spoken to law enforcement authorities about the idea but was advised that it could create problems.

“We’re trying to figure out whether that’s a good idea,’’ he said on Monday. “There’s pros and cons.’’

According to published reports, the teen had no phone or money when he fled. Mayer speculated that he may be afraid that he’d be forced to return to Discovery Ranch, but that’s not the case.

The family just wants him home.

“The word is out,’’ he said. “Come home. We’re worried about his safety. We’re going to have to deal with this in New Jersey at home.’’

The family has spoken with his local friends but Mayer said he was told that no one has heard from his son.

“If someone knows something and helps with transportation, we’ll reimburse them,’’ he said.

“We’re sort of at a loss,’’ he added. “Hopefully some nice Morman took him in.’’

“To hear nothing for a week and a half now is unnerving. I’ll get on a plane tomorrow if I need to.’’

According to fliers distributed, the National Center for Mission & Exploited Children is handling the case.

It has been mistakenly reported that an Amber Alert was put out, but Mayer said that is only issued when there are “signs of an abduction.’’

The teen was described as 5-foot-11, 140 pounds, with brown hair and blue eyes. Pictures used on the fliers show him with longer hair and no glasses, and more recently, with short-cropped hair and black glasses.

Mayer said he may have also grown facial hair. He has no distinguishing marks such as scars, tattoos or piercings. 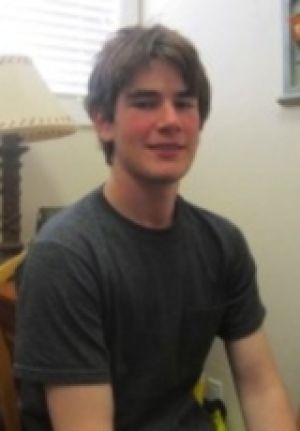